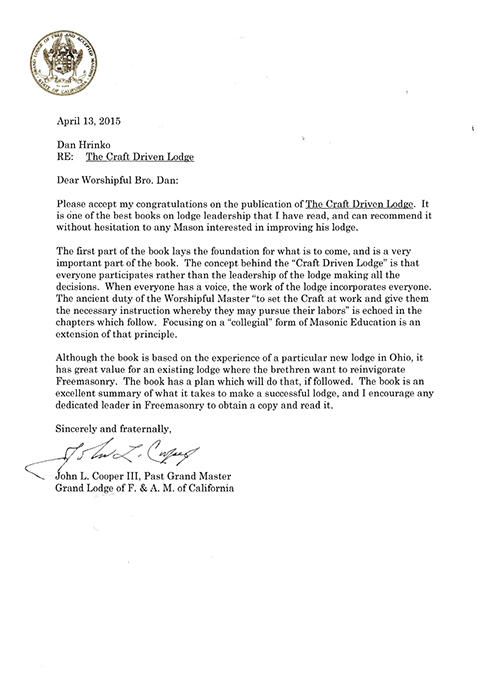 I thoroughly enjoyed your book! I wish you much success with it and in doing so I hope that your book brings much success to the Lodges of those brothers who read it and apply the ideas to their lodge.

The craft in the title of Daniel D. Hrinko’s book refers to two Masonic meanings of the word: craft as in the practice and purpose of Freemasonry and Craft as the fraternity’s members. Starting broadly by defining what men seek in almost any voluntary endeavor, it expounds on this with the story of how and why these desires were acted upon in the creation of the author’s Masonic lodge.

Part One of the book draws on Brother Hrinko’s background as a psychologist. Gently, but with a definite goal, the author expounds on four principles that he and several companions used to guide them in determining what could make Freemasonry more meaningful, purposeful, and significant in their lives. The principles:

Part Two elaborates on the use of the four guiding principles, explaining how they were put into practice in the formation of Arts and Sciences Lodge 792 under the Grand Lodge of Ohio. Each chapter and subsection discusses a practice adopted by the lodge, explains how the members arrived at it, and further clarifies why the practice advances the four principles.

For example, the lodge places multiple Volumes of Sacred Law upon the altar when at labor, each representing the faith of a member of the lodge. This practice, the reasoning that led the membership adopting the practice, and the way the practice relates to the principles of the craft are illuminated.

Since Arts and Sciences has adopted many of the practices of a “traditional observance” lodge, The Craft Driven Lodge might be relegated to the list of the number of titles concerning such lodges. However, cataloging it exclusively as such might miss its greatest strength. This work is neither diatribe nor polemic. Its tone is generally persuasive, attempting to draw fellow Masons to its methodology rather than, of necessity, to its outcome.

The brotherly, but well informed tone of this book should appeal to all thoughtful Masons, especially those wishing to understand the process of a “craft driven lodge.” It should be especially appealing to those who believe there must be more that we can get from and give to our fraternity.

Book review by Donald I. Crews published in “The Journal of the Masonic Society” Issue 29, Summer 2015.